Rosewood Mansion on Turtle Creek is steeped in Dallas history. Originally built as a private residence, the fine estate seen today was constructed in the early 1920s. The owners, inspired by worldly travels, embarked on a tour of Europe with their architect, curating antique pieces, authentic fixtures and luxurious materials.

In 1925, the opulent manor was complete, including a cantilevered staircase and the first private elevator in Dallas. The architecture is influenced by 16th century Renaissance Italy. Ornate interior décor is inspired by grand estates in Spain, Italy, England, France and elsewhere.

Over the years, the palatial estate hosted countless society parties as the center of the Dallas social scene. Famous guests included President Franklin D. Roosevelt and Tennessee Williams. The manor changed hands a number of times from wealthy families to prestigious corporations.

In 1979, The Rosewood Corporation purchased the property and transformed it into a world-class restaurant and hotel. The Mansion Restaurant opened to rave reviews and extraordinary national acclaim in 1980. In 1981, Rosewood Mansion on Turtle Creek, the luxury hotel, was added to complement the original residence, with 143 guest rooms and suites designed with an inviting ambiance. The hotel opened with a grand gala benefiting the local arts and education communities, an early indication of a strong commitment to philanthropic endeavors. 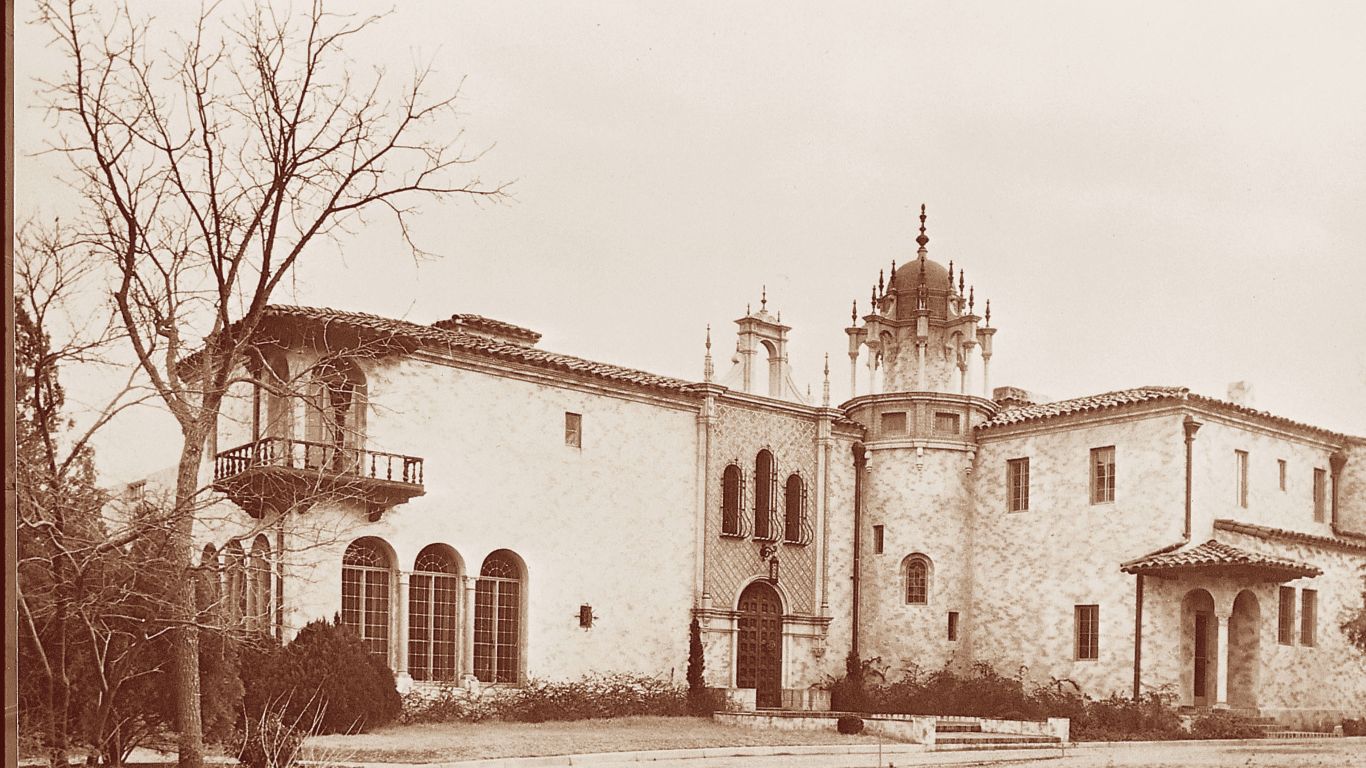 Sheppard W. King, who made his fortune in the cotton market, and wife Bertha Wilcox construct the Mission Revival Manor. The Turtle Creek neighborhood is experiencing the first wave of residential migration north from downtown Dallas, and theirs is the third palatial home built in the area.

The King family travels through Europe on frequent trips with architect John Allen Boyle. They collect architectural inspiration and bespoke design elements as the new manor is built. No expense or talent is spared while the Kings procure rare collections and architectural furnishings from Germany, Italy, England, Spain and elsewhere.

The King estate is one of the finest homes in Dallas, known for lavish parties and social events. The palatial manor has eight rooms downstairs, five bedrooms, four bathrooms and four staff rooms upstairs.

The King family loses their fortune and the iconic estate is sold to Freeman Burford and wife Carolyn Skelly, notable names in the oil industry. The original architect, John Allen Boyle, is retained to remodel and update the manor. Ornate ceiling carvings are added to the grand living room, which later becomes The Mansion Restaurant’s main dining room.

The first of many dignitaries to stay at the mansion, the President visits in honor of the Texas Declaration of Independence’s centennial anniversary. Mrs. Burford has only one month to prepare for the President’s visit and rushes to convert a bedroom closet into a bathroom to accommodate the President and First Lady.

TENNESSEE WILLIAMS IS GUEST OF THE MANSION

Pulitzer Prize-winning playwright Tennessee Williams writes "Summer and Smoke" while a guest at the mansion. The play later makes its world premiere in Dallas prior to its opening on Broadway.

In the late 1940s, oilman Toddie Lee Wynne purchases the estate and converts to his American Liberty Oil Company headquarters. In the late 1960s Gulf Insurance occupies the historic mansion, and in the early 1970s Republic Financial Services acquires the property.

MANSION IN DANGER OF DEMOLISHMENT

Dallas real estate developer Robert Bridewell approaches Rosewood Corporation with an inspired plan to save the historically significant property as it fell in imminent danger of being torn down for a high-rise office building. Mr. Bridewell proposes a restoration of the mansion, turning it into a fine restaurant and a small hotel to be built adjacent.

Built to complement the original estate, 143 hotel guestrooms and suites are designed with a residential style. Rosewood Mansion on Turtle Creek receives the Historic Preservation League of Dallas’ Keystone Award. On May 16, 1981, proceeds from the opulent hotel grand opening gala are donated to Dallas artistic and educational enterprises.